A Japanese designer, Junichi Kawanishi, has designed the 5,000 medals that will be awarded to the Olympic and Paralympic athletes at the 2020 Tokyo Olympics. This choice is in line with the environmental sustainability policy adopted by the organizers of the most important sports event. The Olympic torch, produced by designer Tokujin Yoshioka, has also been created using 30% waste aluminium recovered from the temporary shelters built after the devastating earthquake in 2011. In this article we find out more about the Tokyo 2020 Olympic medals and how their designer, Junichi Kawanishi, achieved his goal.

The 2020 Tokyo Olympics are gearing up to be remembered for their sustainable design. This concept, as well as being trendy (read about the 5 trends here), is certainly highly innovative in its search for materials. The design for the new Olympic torch, announced in the spring, is also by a Japanese designer – Tokujin Yoshioka, one of the most influential figures on the Japanese creative scene and famous as a “poet of materials” – with a third of the materials he used recycled from waste aluminium.

However, already since 2017, the Organising Committee for the 2020 Tokyo Olympic and Paralympic Games has been working on an even larger initiative in terms of environmental sustainability and one of great significance: the Tokyo 2020 medal project. This has involved the collection of small electronic devices, such as used mobile phones, from all over Japan, in order to produce the Olympic and Paralympic medals. 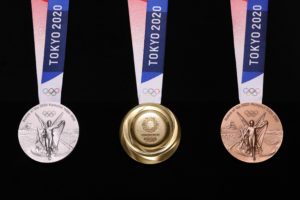 Junichi Kawanishi – Japanese designer and director of Japan Sign Design Association and Osaka Design Society – won the international competition with his medals made from recycled materials.

The project, in which the Committee gathered the materials over time from all over Japan and examined the proposals by the participating designers, has been highly successful. The result is that the 5,000 gold, silver and bronze medals will all be made 100% from metals recycled from used electronic devices. They will have a respective weight of 556 g, 550 g and 450 g and an attractive design.

The back will have a raw finish, while the front, with a more polished finish, will bear an image of Nike, the Greek goddess of victory, standing in front of the Panathinaikos Stadium in Athens, creating a clear link with the historical origins of the Olympic Games, which began in ancient Greece. The ribbons also have historic significance: they are inspired by the layering techniques used for the kimono, a traditional Japanese garment. 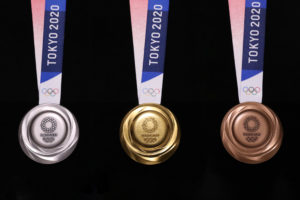 The initiative, as the organizers point out, is aimed at promoting a more sustainable society and highlighting a particular issue, environmental protection, which should concern the entire world.

We are grateful for the large response to this project. We hope that our project to recycle small consumer electronics and our efforts to contribute to an environmentally friendly and sustainable society will become a legacy of the Tokyo 2020 Games.

The Tokyo 2020 medals in numbers 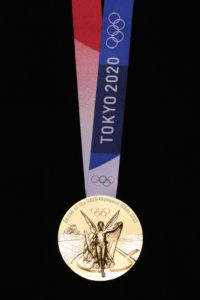 The final deadline for the creation of the medals was reached on 31 March 2019.

Kawanishi designed the medals to resemble rough stones that have been polished so that they shine with “light and brilliance”. Each layer in the medal’s choppy outer composition reflects light differently, symbolizing the energy and commitment of the athletes and their supporters. According to the designer, the bright reflections also signify the “warm glow of friendship”. Kawanishi wanted the medals to symbolise diversity and to represent the concept that in order to achieve glory, athletes have to strive for victory on a daily basis.

This is an eminently meaningful design by Junichi Kawanishi, a figure destined to set trends in the world of design, which is moving increasingly towards environmentally sustainable solutions (as indicated by Architects Declare).