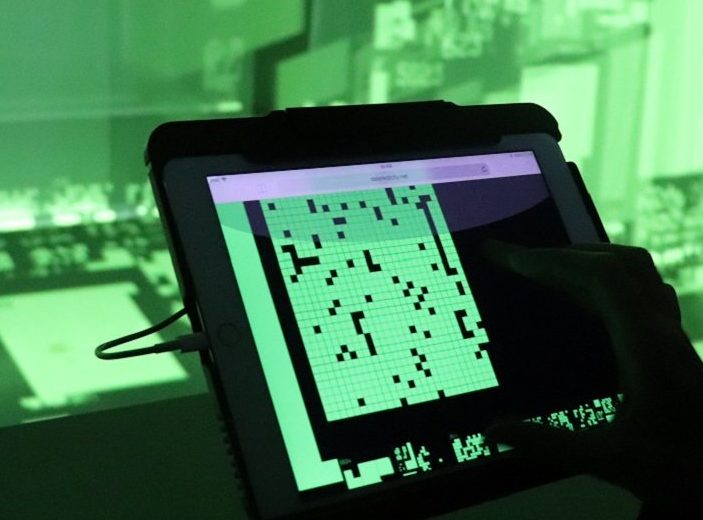 We live in the era of 4.0, smart cities, process automation and everything else that might be defined as technology-driven, an era characterised by two clearly defined extremes. On the one hand, everything can be traced back to the ‘human’ and its innumerable aspects (nature being the first and foremost); on the other, we have technology, which continues to extend its boundaries, creating artificial intelligences (AI) that can learn about and understand human behaviour, playing (for now) multiple supporting roles in almost all human spheres.
What effect is artificial intelligence having on society? What effect will artificial intelligence have on design, planning and architecture? Could we see the spawning of A.I. Design (Artificial Intelligence Design)?

This article will try to provide some answers to these questions, starting with an understanding of what artificial intelligence is and how widespread it has become. It will conclude by showing what the design of the future might look like, doing so also by highlighting what has emerged from the major international design fairs recently attended by Tosilab’s trendwatching team.

Let’s begin by defining artificial intelligence. According to the Artificial Intelligence Observatory of the Milan Polytechnic Management School, artificial intelligence is that branch of computer science that focuses on the development of hardware and software systems with typically human capacities (interaction with the environment, learning and adaptation, reasoning and planning), capable of autonomously pursuing a defined purpose by taking decisions that, until now, were traditionally entrusted to humans.

A constantly evolving science that, it should be pointed out, has virtually limitless application potential. This means that, where industries simultaneously enjoy specific technological developments and improvements in man’s ability to manipulate new technology-provided tools, we could see the rapid, efficient opening up of new artificial intelligence application scenarios. 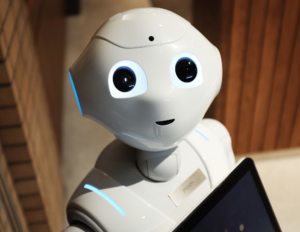 As far as the Italian economy is concerned, most researchers and experts agree that artificial intelligence is still under-employed by business and industry, despite an enormous application potential that is likely to have an ever-growing impact on the economic and social fabric and people’s everyday lives.
Greater utilisation of artificial intelligence depends on 2 crucial, closely intertwined factors: on the one hand, the development of the necessary algorithms, software and hardware and, on the other, man’s ability to organize and enhance his own IT assets so they can be captured and transferred to artificial intelligence.

At this time, artificial intelligence has a fairly broad field of application. It ranges from self-driving vehicles to more purely strategic aspects such as data analysis and chatbots. The following graphic illustrates how the use of artificial intelligence is distributed (based on a study carried out by the magazine Tendenze Online published in February 2018). 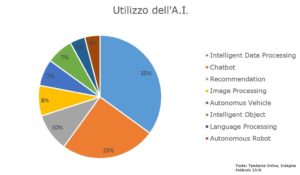 How the use of artificial intelligence is distributed

These far-reaching applications, while at present dominated by pilot projects or prototypes, lead, however, to a conversation about the effective accuracy of the actions that artificial intelligence can perform on its own. To this end, Donald A. Norman – emeritus professor at MIT and and an ergonomics and man-machine interaction expert – states, in his book “The design of future things”:

“Human beings have many unique capabilities that machines cannot – not yet, anyway – replicate. As we make machines progressively more autonomous and intelligent, we must retain the humility needed to recognise the many problems and possibilities of error that lie along this path (…), to recognise the enormous difference between how we humans operate and how machines operate”.

It’s obvious that in fields such as design and architecture, where the human factor is essential, the role of artificial intelligence can only be decisive where it plays a supporting role. Designers, planners and architects now breathe life into their creations by interweaving multiple disciplines – from sociology to physics, from electronics to mechanical engineering. That’s something a machine could never manage (not for the time being anyhow).
A.I. Design will, then, be an innovative discipline. It will continue to provide professionals with valuable support as they seek to improve and create products that keep pace with the times.

To gain a better understanding of the role artificial intelligence plays in design, let’s look at two key examples: the AI Fashion Designer developed by Amazon and Generative Design.
The former refers to e-commerce giant Amazon’s development – in late 2017 – of an AI fashion designer that learns from a collection of carefully collected, catalogued images and creates articles of clothing in certain styles. It is a blend of algorithms and software that, thanks to so-called Machine Learning, can assimilate and replicate patterns, styles, clothing items and just about anything else on the fashion front.
Conceived in the labs of San Francisco, this artificial fashion designer recreates, from scratch, new objects with styles and characteristics similar to the images it has “observed” so attentively. While still at the implementation stage, it’s a project of keen interest to industry professionals.

Like Amazon’s fashion designer, the concept of Generative Design also opens up new design-related frontiers for artificial intelligence. It has even been called the future of design and planning, and it pivots around A.I. As with the Amazon case, Generative Design provides designers and planners with a valuable creativity support tool; via special machine learning systems, generative design software outputs proposals – suggestions yet also actual components and sections of project – and places them at the disposal of the project organisers. The following photo shows the Elbo Chair, made using generative design software. 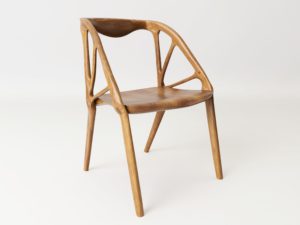 Generative Design features algorithms that recognise text and images, formulates proposals, ideas and suggestions for designers and models solutions. Above all, it can contextualize its proposals to optimise the way the designer pursues the project.
That said, we’re still some way off from having an artificial intelligence capable of developing a design project in complete autonomy. Yet the experts remain confident. One day, they believe, a more highly evolved design capacity, boosted by Big Data, might succeed in producing products autonomously or drawing up projects that have all the characteristics of objects generated by the human mind.

Nevertheless, while design provides artificial intelligence with fertile ground for development, it is hardly the discipline that offers the biggest opportunities for its evolution. In the complex artificial intelligence world, design currently plays a purely aesthetic role and focuses on establishing a dialogue between the super-technological product and the men and women who use it.

It’s no chance occurrence, though, that the main international design fairs already attended by the Tosilab team at the start of 2018 have dedicated plenty of space to new technology.

Below, there follows an exclusive gallery with settings where digital, technologically innovative elements play a prominent, emergent role. 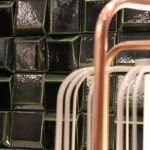 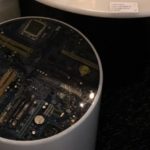 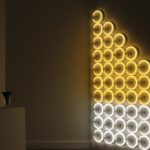 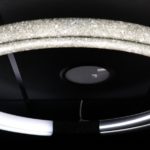 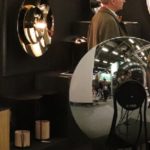 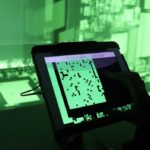 The effects of AI Design: the aesthetic aspects to come

New aesthetics, new shapes and new colours. This is how design looks when shaped by technological, artificially intelligent processes. Piecing together elements using 3D printing programmes and tools is now a consolidated practice. It has contributed to the rise of all-new tastes that cannot be traced back to any culture anywhere in the world. This is aesthetics without any ethnographic framework, geographical coordinates or central iconic character. It hatches in a “non-place” with no links to physical reality. It sprouts on a “virtual planet”, yet offers us imagery we find comprehensible because we’ve already assimilated it through contemporary visual culture.

It does so through the language of software: the carrier of an aesthetics capable of showing us geometries that can only created with automated calculation systems. Since it deconstructs and corrects simple forms with nonchalance, the digital method is a manipulative one. The basic argument is that the possibilities opened up by the convergence of the real and the digital let us develop new codes, thanks to which we can create unprecedented stylistic statements, redefining product aesthetics and laying the foundations of a “virtual exoticism” (from “Virtual Exoticism”, Tosilab – CWW, March 2017).

What about the future? Tell us what you think about artificial intelligence and follow us so you don’t miss news, curiosity and trends about design.